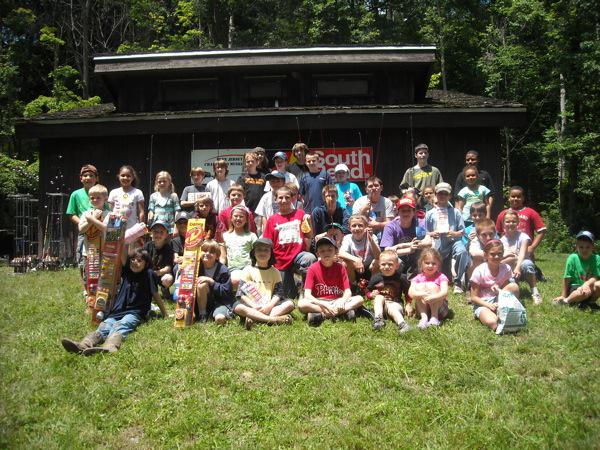 June 29, 2014  The weather was beautiful for the Kid’s Fishing Day held on Sunday June 29th at Lake Nockamixon.  Mike DiGuiseppe opened up the day thanking everyone for attending and a brief introduction on who MI50 is and what we do.   We had 25 kids and about 20 parents.  We started the day with Andy Desko from the PFBC teaching the kids about fishing, knots, catch and release and generally how to be a good citizen on the water.  Andy passed out launch maps, knots charts and 2014 PFBC Rules and Regulations.  The kids had great time fishing for about 2 hours.  While there were a lot of bites on the worms, only 8 sunfish were caught by the kids.   Rumor has it that little Greg Ridge landed a bass but we haven’t seen pictures to confirm it.

After the fishing everyone enjoyed hotdogs, chips, and beverages.  Once again Chef Tom Sabia expertly prepared the hotdogs donated by Berks Foods  with the assistance of Keith/Delawareyes.  We handed out raffle prizes to all kids including lure kits, posters and 10 Rod and Reel Combos donated by Cabelas.  Thanks to Jeremy Kern who once again came through with bait, rods and reels donated by Cabelas.  Pictures of the days event are courtesy of photographer and MI50 Spring Fling Champ, Chris DeSignor.

Thanks to everyone who helped out.