Nockamixon Lake Bucks County
2015 Musky Survey
The Pennsylvania Fish and Boat Commission (PFBC) evaluated the tiger muskellunge and Muskellunge populations in Nockamixon Lake between April 16 and 23, 2015. The PFBC manages tiger muskellunge and Muskellunge populations in many lakes and rivers across the Commonwealth. In southeastern Pennsylvania lakes, these populations are dependent upon hatchery stocking of fingerling to provide desirable recreational fisheries, as no lake reproduction of Muskellunge occurs in the southeastern portion of the state. The 2015 trap net survey was a continuation of a multi-year study that began on the lake in 2012 as part of a larger program designed to evaluate the effectiveness of enhanced stocking rates and regulation changes (no closed season, 1 fish/day, 40 inch minimum size) on musky populations statewide. Please see the PFBC’s Musky Fisheries Management Plan for more details. 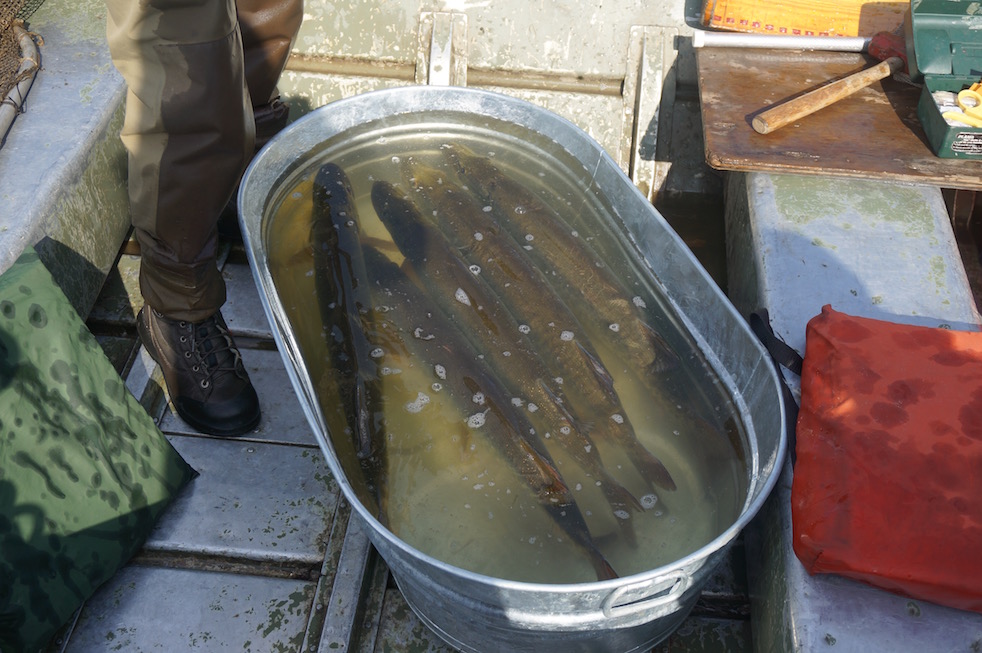 Nockamixon Lake is a 1,450 acre impoundment located in Nockamixon State Park, northern Bucks County…
The park is managed by the Pennsylvania Department of Conservation and Natural Resources (DCNR) and is located approximately 5 miles east of Quakertown and 10 miles north of Doylestown.
The PFBC has stocked Nockamixon Lake with tiger muskellunge and/or Muskellunge since the fish community was originally established in 1974. Fry were only stocked once during the history of the lake and included the stocking of 150,000 tiger muskellunge fry in 1974. Pure Muskellunge fingerlings were stocked in 1992 to 1994, 1996, and 1999 with no success; therefore, their stocking was discontinued by the PFBC. Tiger muskellunge yearlings were stocked in 2007 and 2010, and fingerlings have been stocked in 31 of the last 41 years since 1974. Although the frequency and rate of tiger muskellunge fingerling stockings varied somewhat over the years due to the stocking of unallocated or “extra” fish from the PFBC’s hatchery system, stockings typically occurred every other year at a rate of 5 fish/acre or 7,250 fingerlings. In 2007, the frequency of tiger muskellunge fingerling stockings was increased from 5 fish/acre every other year to 5 fish/acre every year as part of the management change to enhance selected musky waters statewide. Other southeastern Pennsylvania lakes with increased Muskellunge and/or tiger muskellunge stockings include Marsh Creek Lake, Chester County, Blue Marsh Lake, Berks County, and more recently, Lake Marburg, York County.
Additionally, the Susquehanna River Section 5, York Haven Dam downstream to Route 462 at Columbia/Wrightsville, Lancaster and York counties, has also received increased stockings.
In addition to the PFBC’s tiger muskellunge stockings, Muskies Inc., Penn Jersey Chapter 50 (MI50) has independently purchased and stocked 1,885 pure Muskellunge advanced fingerlings into Nockamixon Lake since 2012. The advanced fingerlings have averaged 12 to 16 inches in length. These advanced fingerling stockings occurred as follows: 1,100 fish in 2012, 435 fish in 2013, and 350 fish in 2014. Stocking numbers
Pennsylvania Fish & Boat Commission Biologist Report
were collaboratively determined and coordinated with Fisheries Area personnel in conjunction with modified agency stocking programs.
Twenty Pennsylvania style trap nets were set in Nockamixon Lake between April 16 and 23, 2015. Four trap nets were set daily in water depths ranging from 4 to 12 feet and allowed to fish overnight for approximately 22 hours before being tended the following day. In general, captured fish were counted, measured, and released, and each net was then re-located to another sampling location to ensure that a random sample of suitable habitats were evaluated, including areas in the main lake, Threemile Run Cove, Tohickon Creek Cove, and Haycock Creek Cove. Captured tiger muskellunge and Muskellunge, were examined for fin clips, scanned for Passive Integrated Transponder (PIT) tags, measured for total length, and weighed. PIT tags are microchips about the size of a grain of rice implanted beneath the skin that provide each fish with a unique numerical code for future identification. A fin clip and PIT tag were applied to all untagged fish. Scales were also collected and will be used in combination with sectioned fin rays for age and growth analysis.
Nockamixon Lake supports a very good tiger muskellunge population. A total of 25 tiger muskellunge, ranging from 31 to 41 inches long and 7 to 16 pounds, were captured during the 2015 trap net survey. Most fish were between 34 and 38 inches in length (see Figure 1). The tiger muskellunge catch rate was 0.05 fish/hr or five fish for every four trap nets set. This catch rate was comparable to the 2013 and 2014 catch rates of 0.06 and 0.05 fish/hr, respectively, and exceeded the statewide catch rate objective of 0.01 fish/hr established for Pennsylvania’s reservoirs (see Figure 2).

Calendar Moon ends. This calendar shows 106 weeks into the future. If your calendar is not updated, please set your calendar software to update automatically or re-subscribe the calendar from www.webcal.fi.
Feb
1
Tue
12:49 am 🌑 New moon
🌑 New moon
Feb 1 @ 12:49 am – 12:49 am