NOCKAMIXON MUSKIES – A DAY ON THE LAKE WITH THE BIOLOGISTS 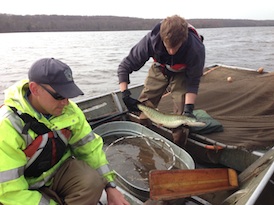 Muskies Inc. Chapter 50 (MI50) was offered the opportunity to follow along Pennsylvania Fish and Boat Commission (PFBC) biologists, Greg Murphy and John Buzzar, as they conducted their annual Muskie population survey on Lake Nockamixon. MI50 has a significant interest in the pure-bred barred Muskellunge that were first introduced to the lake in the fall of 2012 at the average length of 14 inches. Through various fund-raising activities, MI50 spent nearly $14,000 on advanced fingerlings for Nockamixon in order to better Muskie fishing for everyone wanting to fish the southeastern part of Pennsylvania…

April 22, 2014 – The day on the water began at 8 am with the two biologists who were all set to pull the first of four nets scheduled for the day and evaluate their content in detail. The nets, set in place 24 hours earlier, are of the variety for which the netting is stretched from the shoreline out to approximately 5 to 10 feet of water where the netting meets a series of underwater cage-like traps. In theory, the fish traveling along the shoreline run into the net and follow the wall of netting into the traps where they cannot easily find their way out. However, there are a few species of fish that do not follow the wall into the traps. It seems that most Bass and Stripers hit the net and turn around or completely avoid it.

While watching the net pull, I was surprised by what all goes into one trap. Literally, hundreds of pounds of steel, netting, anchoring, ropes, and floats make up one trap. Just as if they were commercial fisherman, the two biologists handled all of this like pros. They engaged in physically intensive labor without entangling and repaired nets on the fly, all while smelling like the drippings from the back of a commercial trawler.
Today, three of the four nets pulled were abundant with life – sunfish, crappie, carp, catfish, and forage fish (a lot). Believe it or not, while this is a Muskie survey, each fish is counted – even the Shad. Some species, like the half dozen large walleye, were measured. The muskies that were found in three of the four nets, received special attention. Not only were they measured and weighed, the biologists took a sample of their scales and clipped a fin in order to approximate the age of the fish. They were then “wanded”. The wand is a handheld device that checks the fish for the presence of a ‘PIT Tag’ (Passive Integrated Transponder), which is basically a unique barcode for an animal.  PIT Tags are dormant – until they are exposed to an electromagnetic field – then the PIT gets all jiggy and sends out its unique ID number that the reader captures. The ID can be used to monitor growth, health and location. If the wand used fails to pick up a tag, the Muskie gets one injected behind the dorsal fin, and is carefully released back into Lake Nockamixon. Biologists are tagging both tiger Muskie and the recently introduced pure-bred Muskie.
It was very encouraging to see the nets come out of the water with a few purebred barred Muskies in them. They measured 26 inches and appeared healthy. In other nettings, Biologist Greg has found them to be in the mid 20 inch range and also healthy. It is suggested that the minimum capture rate needs to be one Muskie in every four nets to have a sustainable population. To date, it appears that our pures are doing very well at the Nock.
We would like to thank the PFBC, and especially Area 6 Manager Michael Kaufmann, for their commitment to improving the Muskie fishery in our part of the state. In the years to come, we may not have to drive many miles in order to have a chance to catch a 50 inch Pure Muskellunge. A big thank you to biologists, Greg Murphy and John Buzzar for their extremely hard work in the field making sure we all have a sustainable fishery no matter what species you like to target. There are a lot of hard working, talented people behind the scenes making this all work. To all the state officials, biologists, hatchery people, conservation officers, park rangers and others…a huge thank you!
Looking forward to reading the PFBC 2014 Muskellunge Survey – it will be posted on mi50.com as soon as it is available.

Calendar Moon ends. This calendar shows 106 weeks into the future. If your calendar is not updated, please set your calendar software to update automatically or re-subscribe the calendar from www.webcal.fi.
Jul
6
Wed
10:14 pm 🌓 1st Quarter
🌓 1st Quarter
Jul 6 @ 10:14 pm – 10:14 pm